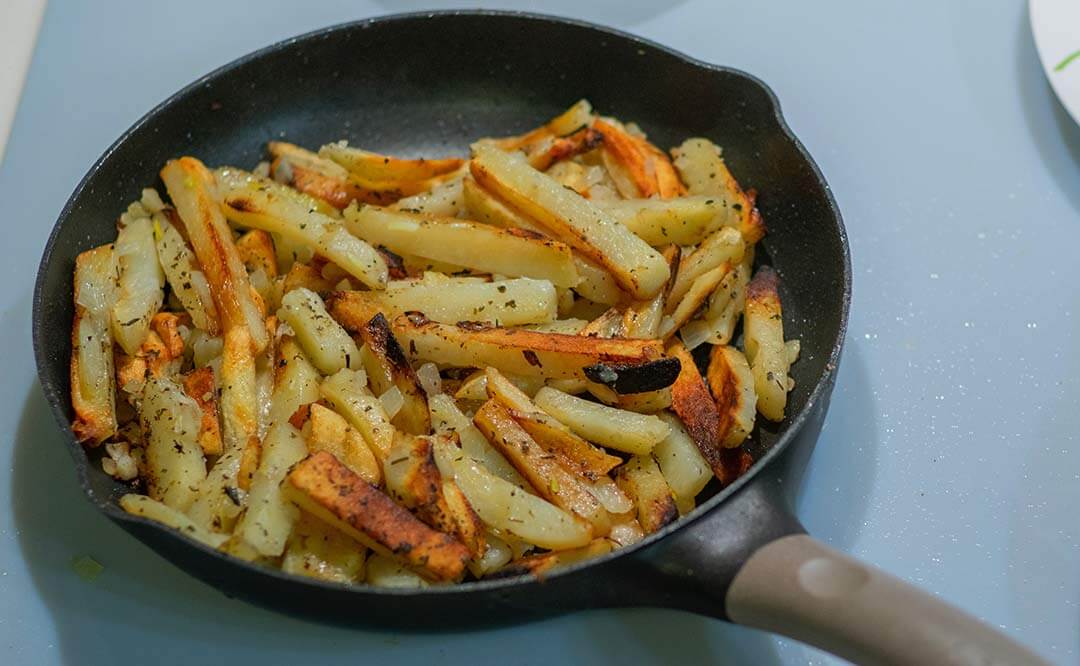 There is no denying that pan-fried potatoes taste great and so does any other fried meal. You would be forgiven to think that you will suddenly drop dead for indulging in the same often.

Most people believe that potatoes are packed with calories which is bad for the body so you can imagine what adding some oil to them could do.

The media doesn’t make things easier either as it has convinced a lot of people that eating fried potatoes is not only an unhealthy choice, it can also increase the risk of death. Quite scary, but also misleading if we may add.

Before we explain that, let us look at the study that has most people thinking that indulging in pan-fried potatoes is a death sentence.

As you may have guessed, there is a huge daunting study behind all the media noise. By this, we mean that the media take pieces of daily research and turn it into something that makes you hate yourself for even thinking about any fried meal.

However, it is never as simple as that and with that said; let us look at the health benefits of pan-fried potatoes.

You are probably thinking that it is all talk but we can show you better than we can tell you so here are the benefits we are talking about.

Potatoes contain Vitamin K, which is thought to manage jaundice, reduce the bleeding in the liver, and facilitate absorption of nutrients.

A deficiency of the same may lead to Crohn’s disease and colitis.

Vitamin B6 plays a crucial role in boosting your body’s immune system as well as its functions. Potatoes contain that vitamin and it also works to fight various infections caused by a deficiency of the same.

Potatoes also contain phosphorus which is known to aid in digestion. There is also the presence of Niacin and riboflavin in potatoes that is needed to metabolize energy to neurological systems and emotional response.

That means that you run a lower risk of developing unhealthy bowel movements, indigestion, constipation, and diarrhea.

You see, potatoes also come with anti-inflammatory properties that reduce arthritis symptoms. This is because they contain copper that is known to strengthen the muscular system.

Prevents Cramps and Strengthens the Brain

A deficiency of potassium in the body can cause muscle cramps also known as hypokalemia. Potatoes are rich in potassium.

You also get a serving of Iron in pan-fried potatoes and what that does is increase the development of your brain by supplying oxygen.

When blood flows to the brain, you get enhanced cognitive activity and avoid ailments like dementia.

A serving of pan-fried potatoes contains pantothenic acid that helps in reducing stress and other mental issues such as anxiety and depression. It also promotes mind fitness ad organizes hormones that cause such conditions.

As for eliminating free radicals, the Manganese present in potatoes comes with antioxidant properties that do just that. Free radicals damage cells and cause life-threatening disease which manganese helps to prevent.

Lastly, potatoes contain sugar and while you may think that is a bad thing, the contrary is true. Sugar is a source of energy and when oxidized by Vitamin B1, it becomes usable.

Of course, you need the energy to run around and go about your daily activities. Just ensure that you do not consume the potatoes in excess because it could cause other health issues.

How to Make Potatoes Healthier

Now, potatoes are not all the way healthy even after all the health benefits we have discussed above. They only make a great addition to your diet when consumed in moderation.

They contain fiber that aids in digestion and they are quite filling as well. How you prepare the potatoes makes a big difference as far as nutrition.

Do not Peel off the Skin – You would probably frown at the thought of cooking and eating your potatoes without peeling off the skin. However, most nutrients in the potato are found in the skin. Therefore, you may want to skip the peeling process. Not only will you get more minerals and vitamins per serving, but you will also have easier bowel movements.

Cook Them – Instead of eating your potatoes raw, you want to pick a healthy cooking method for them. By cooking, you also kill off bacteria that may be harmful to your health.

Steaming, boiling, and baking potatoes is more preferable when it comes to minimizing the calorie and fat content in your potatoes.

Go Whole – Processed potatoes have higher sodium, calorie, and fat content which is not good for you. As such, you may want to go for whole potatoes.

Still on that, you want to pick healthy toppings for your potatoes as they can improve the nutrient content and make your pan-fried potatoes a nutritious meal.

Not peeling your potatoes, having nutritious toppings, and steaming, boiling, or baking them is the healthier way to go.

Potatoes are versatile, they can be cooked using different methods and they are high in starch, fiber, antioxidants, minerals, and vitamins. It is no wonder then that they are a favorite go-to meal.

That said; pan-frying your potatoes may come with potential adverse effects such as weight gain especially if done often or in large amounts.

As you have seen from the article, the cooking method and portion size determine the effect that potatoes will have on your health.

Our answer to whether pan-fried potatoes are healthy or not is that they are. The catch is to prepare them healthily and eat in moderation.